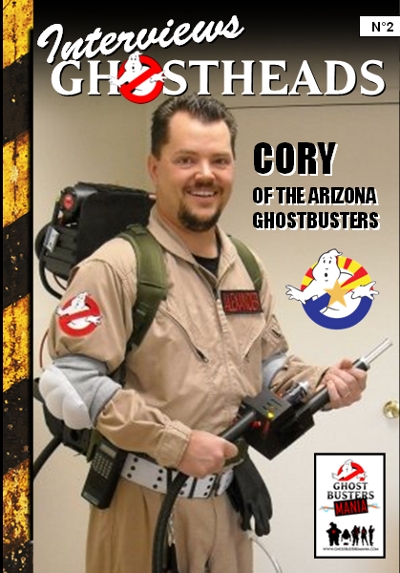 Ghostbusters Mania is proud to present N° 2 “Interview with Ghosthead” Cory Alexander, a Captain with the Arizona Ghostbusters

Cory, tell us a bit about yourself. Who are you? What are you doing? Other hobbies or interests?

My name is Cory Alexander, and I’m a Captain with the Arizona Ghostbusters – Firehouse 520 (covering Tucson and southeast Arizona). My normal job is managing a manufacturing plant in the small town of Willcox. I’m married, and we have two children. My wife and I are both gamers and kind of geeky, and we have a history of volunteering. When I learned of the Arizona Ghostbusters, I decided I could apply my love of the Ghostbusters license to my volunteering to help support good causes while having fun and meeting interesting people. In my free time, I enjoy classic arcade, pinball and console games, Xbox360, PC games, and building projects (props, household projects, etc.). Prop building has always been a desire of mine, but I’ve only really started doing it seriously in the last few years.

I fell in love with Ghostbusters when I was 9. My dad took me and my sister to see the film in theaters when it was released back in 1984. I’ve been a huge fan ever since. I collect anything related to Ghostbusters. I still have all my RGB toys, games, trading cards, etc.

I’ve wanted a Ghostbusters costume since I was 9 years old, but I only started building my Ghostbusters uniform, pack, and other props back in October of 2009 for Halloween. I decided I was finally going to commit to investing in the uniform and pack from scratch for Halloween. This was before I really knew of the Arizona Ghostbusters, but having the equipment and uniform came in handy when I joined the team. I have a trap project I’m working on built from Lexan, and I’ve recently acquired a fiberglass proton pack shell and aluminum motherboard to build a more accurate and sturdy proton pack. I also have two RGB toy proton packs I’m converting for my girls to use. I’m converting them to look more like the packs used in the films.

My favorite event actually has to be Phoenix Comicon 2011, just because of the scale of it. We had a huge booth with Stay Puft, the Ecto-AZ, Vigo, Ghostbusters arcade game, and William Atherton. We raised some money for the Cystic Fibrosis Foundation, and we had a lot of fun doing it. I will say though, that some of the smaller events are just as fun. Each event has a special memory. One of my favorite memories was at a Leukemia and Lymphoma walk. We met a nice woman and her daughter. Her daughter was blind, but she was a huge Ghostbusters fan (and a Leukemia survivor). She had been blind her whole life, and had never seen a proton pack or a Ghostbusters costume. So, she asked if she could feel my proton pack and arm patch to “see” them. Of course, I let her. It was really moving to have met her… a cancer survivor and Ghostbusters fan, who I would never have met if I hadn’t been volunteering at this particular event.

I’ve been a Ghosthead since the movie came out in 1984. I quote it in conversation with friends. My wife and both of my daughters are fans of the movie, and they support my volunteer work as an Arizona Ghostbuster. I’m really proud to be a member of the Arizona Ghostbusters. They have a solid history of working with notable charities in Arizona… raising money, raising awareness, and bringing smiles to other volunteers and event participants. Being a part of my franchise is great! We’re all like family with each other. I always tell anyone who wants to join that you must be a volunteer first and a Ghostbuster second… and that’s what we all are… volunteers who all happen to love Ghostbusters.