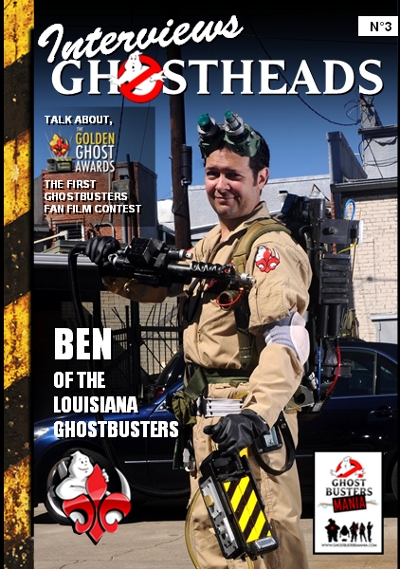 Congratulations to Ben for his great passion!

Ben, tell us a bit about you. Who are you? What are you doing? Other hobbies or interests?

Hi Max! It’s always great to do things with GB Mania. What you do is simply amazing. You should get your own Ghostie award!

I’m a cajun husband and dad in deep south Louisiana, home of the best food and air conditioners on the planet. This is a special little pocket of unique culture in the world with strong french heritage that runs back to the exile of the Acadians from Nova Scotia in the 18th century.

I spent most of my career after school working in the television industry in New York City, Houston, and now back home in Louisiana, though I’ve left the life of TV behind. I’m now working to get my license to practice the family business of Land Surveying and take over for my dad.

I like killing time with my wife and little Ghosthead son, running, playing and listening to music, gaming, building and fixing things, and I especially like bringing smiles to people’s faces with my brothers and sisters in the Louisiana Ghostbusters.

How did this passion for Ghostbusters begin?

My first exposure to Ghostbusters was on MTV actually. I was about in 4th grade with 3 teenage sisters who had it on all the time. This was back when MTV actually played music videos 24-hours-a-day. The Ray Parker Junior video came on and I was fixated. I had to see that movie. After that I was hooked and have always held Ghostbusters in very high regard as one of my favorites next to the other great Scifi and fantasy genres.

My baby sister and I like to throw big Halloween parties when we can at the family pool camp. We go all out and decorate, and I had done some pretty neat costumes in the past. When I was flipping through what was available out there trying to brainstorm I came across the Rubies Ghostbusters suit and inflatable proton pack. I knew two things instantly: One, I was going to be a Ghostbuster for Halloween. And Two, I could do better than some inflatopack. A quick search of the internet led me to proptopia and some nice reference pics and about 30 man hours later using junk in my garage I was finishing the 1.0 version of Hades, my “just won’t quit” scratch-built proton pack. She’s got lots of bite and has really seen some adventures since that first party, and her evolution over the years has been quite a trip!

That’s a tough one. Being a Ghostbusters has allowed me to have drinks with Ernie Hudson, shake hands with LSU fans in an Atlanta Parade, save a few small furry lives, help a guy pay for a kidney….

About half of what I do is about having fun, and the other half is about doing things for others with the costume and props, which seems to be a great catalyst for helping people take their minds of their problems or for opening up their hearts to the problems of others. So I’d have to list 2 events:

-Dragon*con 2010 and the unprecedented turnout of Ghostheads and Ectos was just amazing. That gathering of folks who all put their hard work into something they loved so much was an amazing thing to experience. You could look in the eye at people all around you and see they too had suffered the way you suffered on the workbench, with the shoulder soreness, with the back pain, with the heat in those suits, because in the end it was all worth it! The work leading up to event lead to a moment when you forgot all the pitfalls it took to get there and just reveled in the moment of pure fanboy joy to be around so many dozens of others just like you in that one special way.

What does this mean for you to be a Ghosthead? And what makes your franchise?

Being a Ghosthead for me personally is a chance to recover a sense of purpose and the chance to temporarily lighten the burden others face through a common love of a common thing. I used to suit up for another organization back in high school and do a lot of good, and this was a way to combine my passion for a franchise of entertainment with a chance to continue that role of service in a way that is a lot of fun.

The suit really does enhance good will. I can’t stress that enough. A lot of folks ask why it is we have to wear the suit to do charity? Why can’t we just leave Ghostbusters out of our desire to make positive change in our communities? All I can say is, when you see the amount of good vibes the gear brings to passers-by, the smile and wonder in the eyes of adults or the kids who they’ve shared Ghostbusters with…if you are careful about using the gear and being a Ghostbuster in the right place and time, truly amazing things can come of being a Ghostbuster costumer that just wouldn’t be possible or as fun for us and for our community without the gear. And for us, just wearing the gear for fun isn’t enough. If we weren’t focused on being a franchise that strives to do good around our area we’d all sort of look at each other in our gear and ask, “what’s the point?” I know that approach to being a fan group isn’t for everyone, but for the Louisiana Ghostbusters, it’s `Saving the World One Charity at a Time’ or nothing.

And what can I say about my brothers and sisters of the Louisiana Ghostbusters? They are amazing people. They are selfless volunteers with a love of the game we play and the work we do. They are talented masters at what they do, be in their professional lives, roles as parents, roles as role models, or in their donated time as walking-talking heroes. They humble me every time we interact and if not for them, well, I think our neck of the woods wouldn’t be quite as interesting.

Want to talk about the Golden Ghost Awards?

Sure! The Ghosties are still in the daily View and Vote phase from now until June 19th. Folks can go there and vote daily for their favorite Ghostbusters fan film of recent years. The standings are really close right now so if anybody flinches even a little and forgets to vote it could cost their film first place or runner up! Make sure to get out there and vote, and do it every day!

Thanks for the chat greetings to all your spectacular franchising from Ghostbusters Mania.