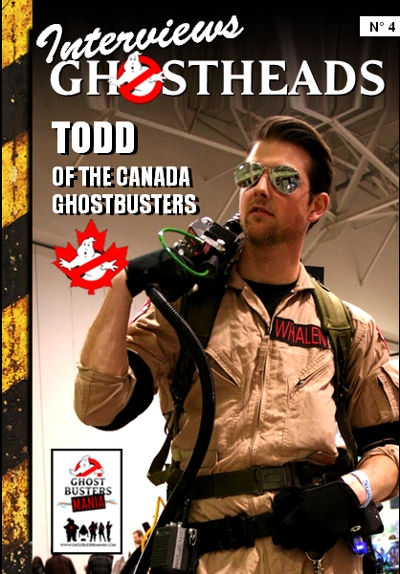 Ghostbusters Mania is proud to present N° 4″Interview with Ghosthead” with Todd of Ghostbusters Canada (BC).

Todd, tell us a bit about yourself. Who are you? What are you doing? Other hobbies or interests?

I am Todd Whalen, I admin the website Ghostbusters Canada ghostbusterscanada.ca and in addition to being a Ghostbusting enthusiast I’m a Dockhand for a Seaplane Company and an Amateur Filmmaker. When I’m not doing that, I’m usually spending time with my wife or training at the gym. I’m a film nut too, so anytime I can go out to movies or have a quiet night in with a DVD is a good time had by all.

I first saw Ghostbusters when I was about five. I was intrigued, excited and terrified. I loved the science and mystery of it right away but it was Ray Stantz that had me hooked. The enthusiasm, the excitement, all of that I just gravitated towards right away. As a little five year old kid I loved it so much that I would go so far as to introduce myself to other kids my age as if my name was Ray Stantz. I followed the cartoon, the sequel, I had all the toys. I fell in love with it again while I was in film school two years ago and gained a whole new appreciation for just how well put together Ghostbusters is as a film.

I’d always wanted to put together a really amazing Ghostbusters costume, but really didn’t want to if I couldn’t do it justice. Last year I found a flightsuit on eBay in my size for a great price and that got me rolling. I’d been lurking around GBFans for a while seeing all the amazing work that was out there and so I started connecting with a few other people, getting advice and ideas on how to bring all the pieces together. I’ve never been that handy with tools or building things, but I wanted to try a little so I bought a Kenner Ghost Trap and did a movie-style repaint and I’m really happy with it!

That’s a tough one. Each event I’ve done has brought a different kind of excitement and I’ve just been having more and more fun. Two days after I got the last pieces for my uniform I got the heads up from Proton Charging that Dan Aykroyd was going to be appearing in Vancouver. Dream come true! And that led to me meeting with a bunch of the other Ghostbusters locally, which was really wild. Showing up that day in my uniform to see Ryan, Heath, Geoff, Julio, Carlo, and Colin all in uniform was a kind of an exciting relief that I wasn’t the only one that had this passion!

I also had the chance to attend Toronto Comic Con and hang out with the Ontario Ghostbusters, and what an experience. I can’t thank all of them enough for being so welcoming of me participating with them, and even including me in the costume contest as a member of the team. Toronto was also the first Con I’d attended since I was a kid, and it took me back being in that environment again.

And then I was honoured with the opportunity to meet and greet with Ghostbusters Italia and GB Mania! I’ve been a fan of films like Return of the Ghostbusters, Spilled Milk, and GB Italia, so to be able to meet with you guys and really see that this passion knows no boundaries was a real thrill. I have a project for my Italia patch that I’ll have to send you pictures of!

Ghosthead… someone that can’t get Ghostbusters out of their head. Hows that? That would be me for sure.

I think everyone that will read these articles has wanted to be a Ghostbuster since they were a kid, and I was no different. So to see that others were getting out there and really doing it, not just by making costumes and fan film, but doing charity work in their communities, I thought was fantastic. It was just a matter of finding others locally that were interested in it to get the ball rolling. Between the Dan Aykroyd signing and Halloween where I met a few other Ghostheads, we had a group that had at least a couple people interested in getting out there as the Ghostbusters of British Columbia.

What made you want to start Ghostbusters Canada?

Actually the branding for Ghostbusters Canada in the form of the Maple Leaf No-Ghost logo already existed thanks to Jay Tigran and Chris Stewart and I didn’t know of any other Canadian Franchise other than Ontario, but I knew there had to be other Canadian Ghostheads out there. I never felt I had much to give to the prop-building community since I’m far from a talented prop builder. However, I though that if we had a National level branding for Canadian Ghostbusters it might encourage more people to put a team together and start participating in more events. I wasn’t sure how it would be received at first, but so far it’s promising since we started with Ontario and now we also have teams in BC, Alberta, and two in Quebec. I’m really pleased to see how the Canadian community is growing and we have a few exciting things happening soon – July 1st is not only Canada Day, but also International Dan Aykroyd Day!