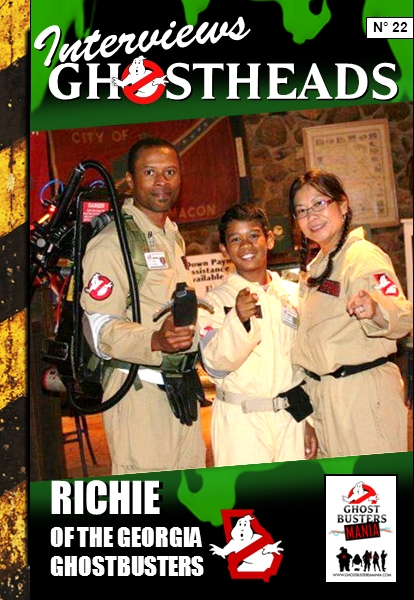 Ghostbusters Mania Return”Interviews to Ghostheads” with Richie of the Georgia Ghostbusters.

Richie, tell us a bit ‘you. Who are you? What are you doing? Other hobbies or interests?

Well, I’d like to start by saying, it’s an honor to be interviewed by “Ghostbusters Mania!” I’m well aware of the work that you all do, and I’m humbled to be a part of it.
Now, as for Richie “The Man,” I have NO idea where to begin (LOL). Let’s see….I’m 5’7…recently celebrated my *ehem* 40th Birthday…married to the most patient woman in the world (she has to be in order to tolerate me/LOL) for 15yrs….and, we have the greatest son any parent(s) could ask for!! Well, beyond the realms of “Ghostbusters,” my other interests includes…playing the game of Golf, reading comics, surfing the “Internet”, listening to music (Classical, Jazz, Alternative, R&B, etc.) and enjoying quiet evenings with a gooood cigar to end the day (hahahaha). Being an 80’s kid, my favorite tv shows to watch were “Knight Rider,” “The Dukes of Hazzard,” “Street Hawk” and “Airwolf” (just to name a few).

How does this passion for Ghostbusters?

My passion for Ghostbusters began long ago…in a galaxy far, far away (wait a minute…that’s the wrong movie) hahaha. No, but, seriously…it began like other “Ghostheads” out there. From the moment I saw the movie as a child, I was hooked!! Watching those guys chase after ghosts (while looking cool in the process) sparked a flame that’ll last for the rest of my life. Unfortunately, I wasn’t able to view the movie in the theater back in the 80’s. I viewed it for the first time at home on while watching it on HBO. But, everything came “Full Cirlce” for me this past October because, I was able to view the movie in the theater for the first time….WITH my son! And, we LOVED it!!!

I built my first Proton Pack one year ago. Cardboard dominates the major parts of the Pack, while a lot of the smaller peices are found household items (which are a one time find). My second Pack was constructed in a similar fashion, except this time…BETTER!!For my second Pack, I used lights purchased from “Jupiter Electronics,” resin Grips, Red & Blue tubes, GB2 style Ribbon Cable, real Clippard Valves and other resin pieces…all via eBay. By the way, I have to thank the folks on GBFans.com, for the knowledge shared!! I’ve never posted on their forum, but I visit the site almost daily. As for the uniform…it’s still a “work in progress.” I recently received the proper “white canvas Pistol Belt (w/ metal latching)” and elbow pads by “Spectrum.” I hope to have the uniform completed by the end of January 2012.

My favorite event to participate in is the “Kids Yule Love” charity that’s held during the Christmas season. We (“Central Georgia Ghostbusters”) and others from the community share in giving families a little extra joy during the season. And, speaking frankly on the subject…it’s the BEST FEELING IN THE WORLD!!!

What does this mean for you to be a Ghosthead? And what makes your franchise ?

For me, being a “Ghosthead” means…giving something back to others. Whether it’s a “moment of reflection” for an adult that had forgotten about the movie, but remembered and smiled after seeing me/us dressed in gear. Or, seeing the look on a child’s face when one is approached with a “high five” greeting. The simple things in life, you know?!