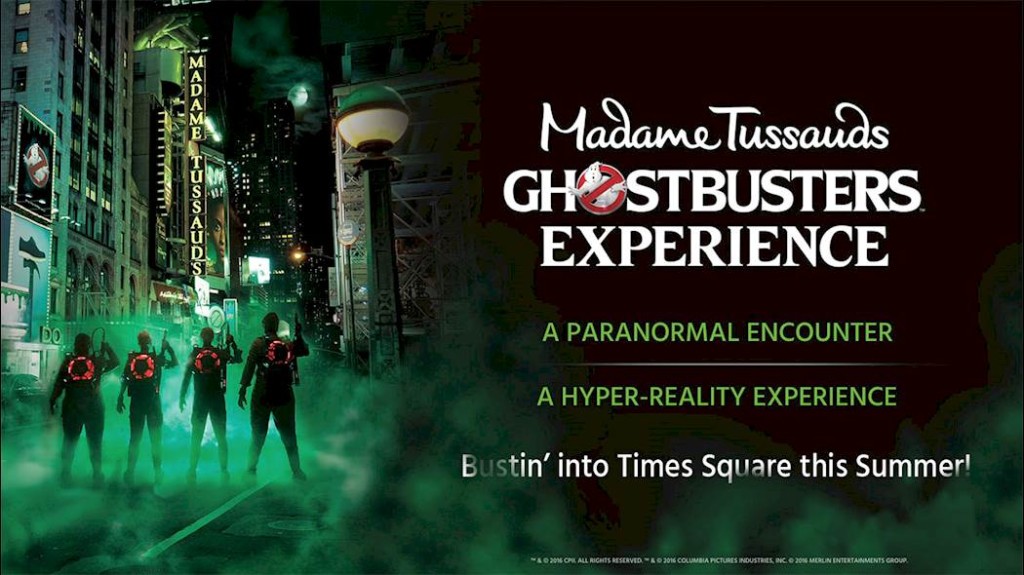 Here at Madame Tussauds New York, we’re big Ghostbusters fans. Celebrating the return of Ghostbusters this July, Madame Tussauds is bringing the cinematic experience to life like never before! Brace yourself for the Ghostbustin’ experience of a lifetime complete with spooks in multiple scenes that are true to the film. Featuring state-of-the-art technology that’ll inspire awe from even the most veteran of tech junkies, authentic props from the film, special effects to complete the environment, figures of the 2016 spirit hunter crew and more. We’re #notjustwax! 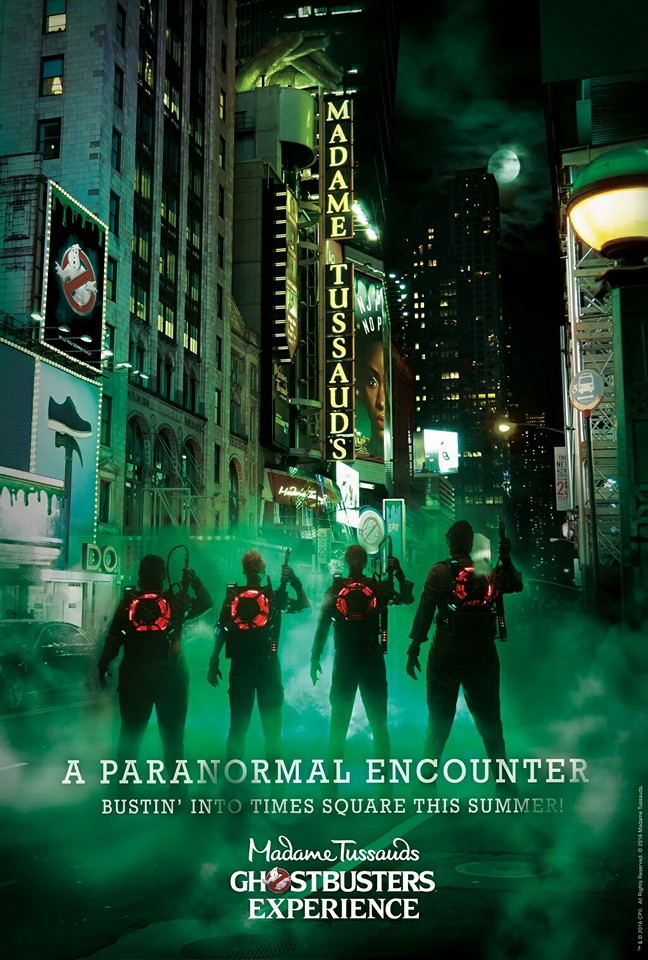 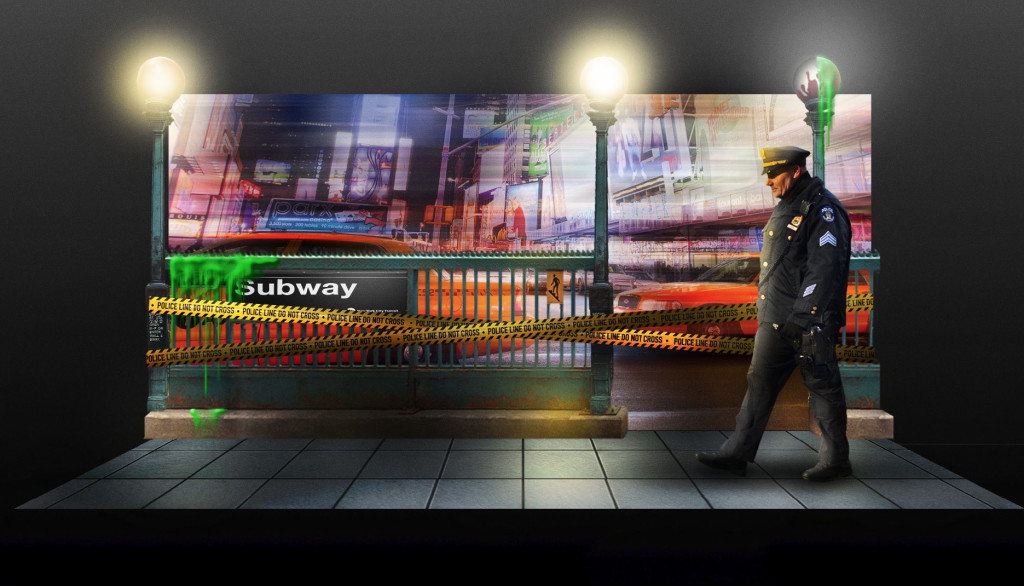 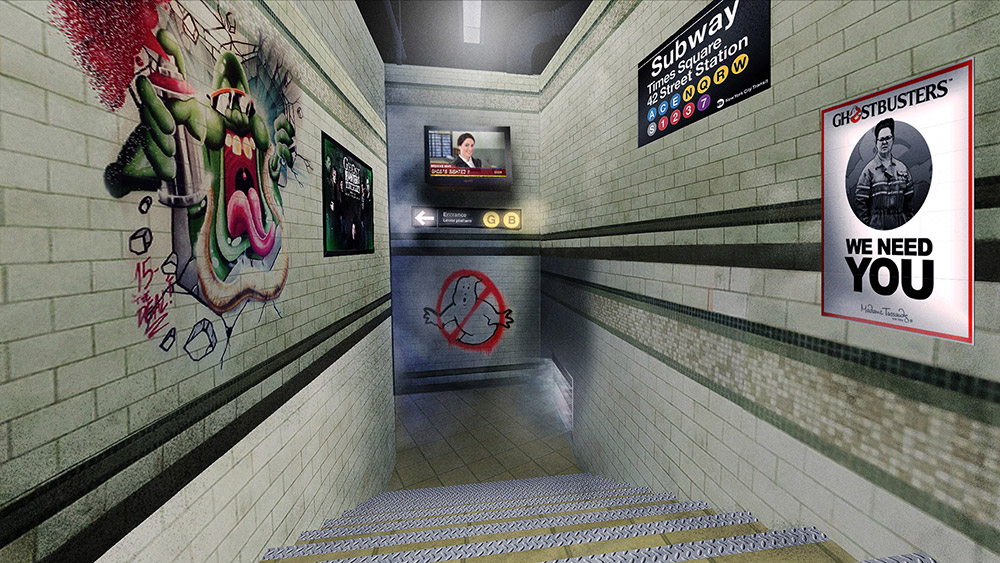 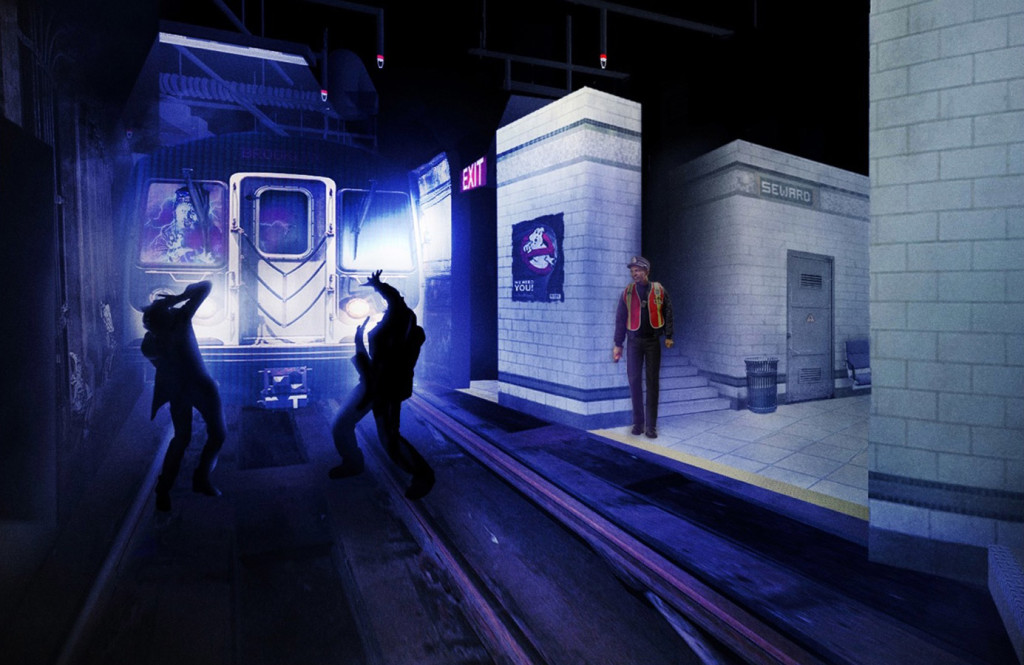 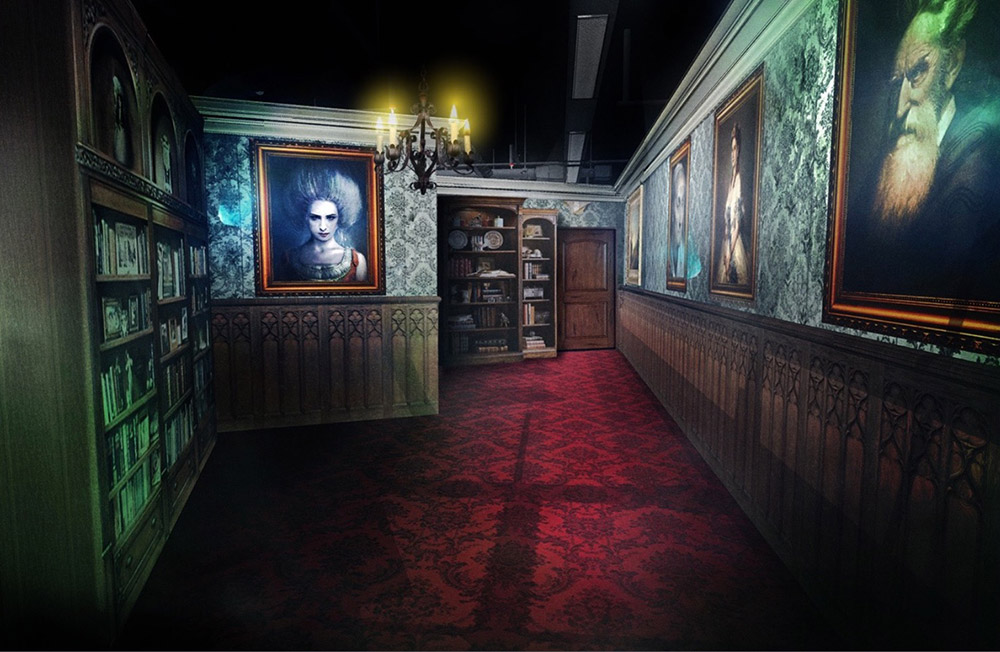 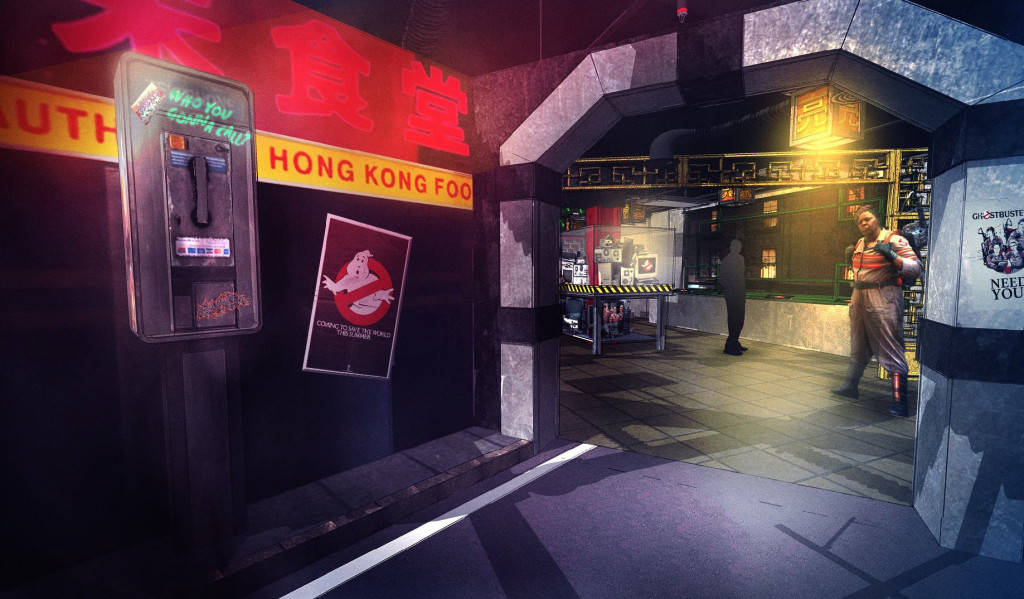 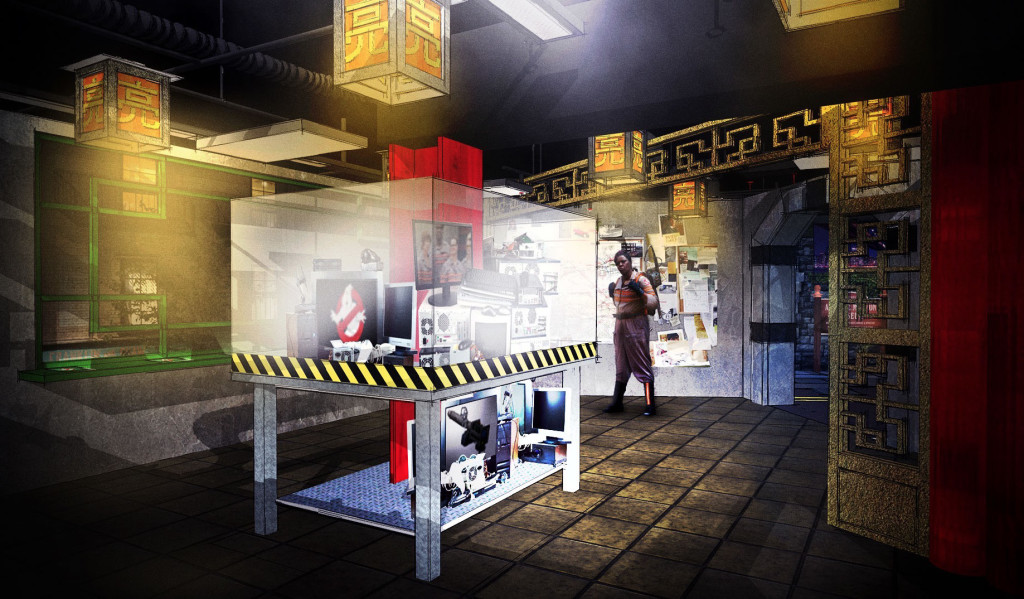 CULVER CITY, Calif., May 9, 2016 – In advance of the July 15, 2016 release of Ghostbusters, one of the most highly anticipated films of the summer, Sony Pictures, Madame Tussauds New York, Ghost Corps and THE VOID have teamed up to bring Ghostbusters to life like never before. Included in the multi-sensory, all-immersive environment will be Ghostbusters: Dimension, a first-of-its-kind, virtual reality (VR) experience based on the studio’s new Ghostbusters movie.

Scheduled to open to the public on July 1, 2016, the VR experience will launch exclusively as part of the Ghostbusters Experience at Madame Tussauds New York in their legendary Times Square attraction. The construction of this multi-layered and sensory environment is already underway and is designed to fully immerse visitors into the fantastical and spirited world of the new film.

Visitors to Madame Tussauds New York will also be invited to engage with Ghostbusters like never before. The cinematic experience is brought to life with state-of-the-art technology, authentic props, costumes, a vehicle, gadgets and exclusive content designed to spook guests as they move through multiple scenes inspired by the film. After exploring the iconic Ghostbusters Headquarters, guests experience the epic finale, in which visitors take part in a ghost hunt of their own, saving New York City from a paranormal villain. This supernatural encounter will also include figures of the Ghostbusters crew from the new movie, all of whom are prepared to help visitors wage battle against nefarious paranormal activity.

In Ghostbusters: Dimension, developed by THE VOID in collaboration with Ivan Reitman, Paul Feig and Sony Pictures, audiences will experience what it is like to be a Ghostbuster, tracking and trapping a supernatural foe through a New York apartment complex in an environment that combines physical props and sets, real-time interactive effects, and virtual reality technology designed by THE VOID.

“Ghostbusters has an incredible, passionate fan following, and now VR technology allows the fans to become a Ghostbuster themselves within Madame Tussauds New York. The technology is breathtaking, the experience is thrilling, and what better way is there to use VR, than to let audiences inhabit the stories they love,” said Ghostbusters creator Ivan Reitman.

“Who wouldn’t want to answer the call, suit up as a Ghostbuster, and blast their way through a ghost-infested New York apartment with a proton pack?” said Jake Zim, senior VP of digital marketing at Sony Pictures. “We expect this experience will draw fans of all ages to Madame Tussauds and generate a lot of buzz around the release of our new Ghostbusters film this summer.”

“Ghostbusters is an amazing property that has kept fans enthralled for decades, so as we roll out immersive VR experiences around the world, we’re thrilled to have Sony Pictures on board as our first studio collaboration, working with us to develop a truly memorable experience that will have fans talking for years to come,” said Ken Bretschneider, Chief Executive Officer and Co-Founder at THE VOID.

“We are thrilled to work with Madame Tussauds and THE VOID to bring our iconic franchise to life in the heart of New York City.  Fans of Ghostbusters will have the opportunity to take a walk through an immersive environment with iconic scenes from the film, and bust ghosts using cutting edge virtual reality technology,” said Mark Caplan, Senior Vice President, Sony Pictures Consumer Products.

Ghostbusters makes its long-awaited return, rebooted with a cast of hilarious new characters.  Thirty years after the beloved original franchise took the world by storm, director Paul Feig brings his fresh take to the supernatural comedy, joined by some of the funniest actors working today – Melissa McCarthy, Kristen Wiig, Kate McKinnon, Leslie Jones, and Chris Hemsworth.  This summer, they’re here to save the world!  The film is produced by Ivan Reitman and Amy Pascal, and written by Katie Dippold & Paul Feig, based on the 1984 film “Ghostbusters,” written by Dan Aykroyd and Harold Ramis and directed by Ivan Reitman.  The film will be released in theaters nationwide on July 15, 2016.

Madame Tussauds New York, prominently located in the heart of Times Square, is more than just a wax museum; it is an iconic “must do” New York experience and soon to be the home of theGhostbusters Experience. There are no velvet ropes or obtrusive barriers to keep guests from interacting with over 200 of the world’s most recognizable and influential icons. The fully immersive, one-of-a-kind attraction is great for families and visitors of any age. With particular dedication to regional visitors, local admissions offers are available. Visitwww.madametussauds.com/newyork or call (866) 841-3505 for more information.

Visit www.ghostbusters.madametussauds.com for more information about Ghostbusters Experience. To join in the conversation and follow the latest updates, be sure to use #GBXP across all social media platforms.

MERLIN ENTERTAINMENTS plc is the leading name in location-based, family entertainment. Europe’s Number 1 and the world’s second-largest visitor attraction operator, Merlin now operates 112 attractions, 12 hotels/4 holiday villages in 23 countries and across 4 continents. The company aims to deliver memorable and rewarding experiences to its almost 63 million visitors worldwide, through its iconic global and local brands, and the commitment and passion of its managers and 26,000 employees.

THE VOID is leading the world in a new form of immersive entertainment. A combination of a physical set, real-time interactive effects, and virtual reality are utilized to create Hyper-Reality experiences, which allow participants to not only watch a movie or play a game, but to live in them. For more information, visit: www.thevoid.com or email press@thevoid.com.